In Bull Run Fever 2008, players are invited to join the Running of the Bulls Festival and outrun a pack of angry, snorting bulls to prove their courage. The game includes different levels of increasing difficulty, and players will have to pick up speed-boosting items and dodge obstacles to make it to the finishing line.

Bull Run Fever 2008 was entirely conceived and developed by the mobile games unit of the Digital Chocolate Barcelona studio under my management. 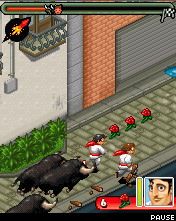