In UEFA Champions League 2006-2007 (the official videogame for mobile) players pick a team from the officially-licensed selection, see it start playing against their opponent, then interact with the footballers on-screen via a series of cards that enable them to take control of each of them and direct them to perform a particular action. The card-based mechanic was highly praised at the time for its originality and effectiveness at engaging players in the relatively new medium of mobile games.

UEFA Champions League 2006-2007 was one of the finalists at the 2007 edition of the Meffys awards, one of the mobile industry’s top accolades, and won a Pocket Gamer Silver Award that same year.

Champions League 2006-07 a game that is not only an entertaining additional to the portable footie canon, but a refreshingly original one, too. Whilst the PSP version set the tone for gameplay innovations, the mobile game has extended things considerably, effectively creating a whole new footie genre. 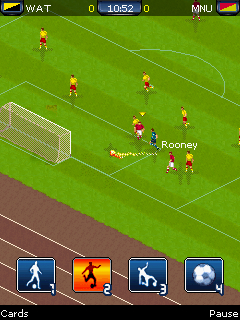